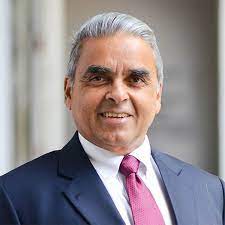 As an authoritative speaker and author on geopolitics, former President at UN Security Council, through his books, diplomatic work and research, Dr. Mahbubani reenvisions global power dynamics through the lens of rising Asian economies.

The expert is a Distinguished Fellow at the Asia Research Institute (ARI), National University of Singapore (NUS). He has been privileged to enjoy two distinct careers, in diplomacy (1971 to 2004) and in academia (2004 to 2019). He is a prolific writer who has spoken in many corners of the world.
In diplomacy, he was with the Singapore Foreign Service for 33 years (1971 to 2004). He had postings in Cambodia, Malaysia, Washington DC and New York, where he twice was Singapore’s Ambassador to the UN and served as President of the UN Security Council in January 2001 and May 2002. He was Permanent Secretary at the Foreign Ministry from 1993 to 1998. As a result of his excellent performance in his diplomatic career, he was conferred the Public Administration Medal (Gold) by the Singapore Government in 1998.